For the past 2 months our G3 TKD Competition Team has participated in the 2015 HERO Fight League series. The series came to an end on 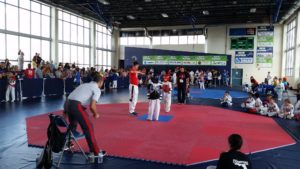 South Florida is a very strong region when comes to Taekwondo Olympic Sport and the idea of putting together leagues is just awesome. It keeps the athletes up-to-date on what’s going on in terms of techniques and strengths our Taekwondo community.It was a great experience and we are looking forward to a great 2016 year of competitions”, says Head Instructor Lucas Rodrigues.