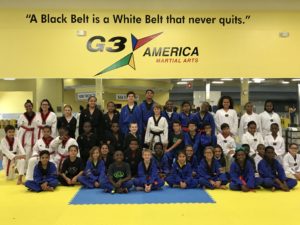 Our G3 America Martial Arts and After School programs are unique and developed to maximize every student’s potential! Our level programs and classes are designed to gradually and consistently assist our students to learn and grow their skills!

Our goal is to assist students to become black belts in excellence/character based on our 40 biblical principles of leadership, and present to them the opportunity to become competitive athletes. Founded by Instructor Lucas Rodrigues, 4th Dan Black Belt WTF and Head Instructor with over 25 years of Martial Arts and coaching experience, G3 America provides Martial Arts classes for kids, teens, and adults. Our programs are based on Olympic TaeKwonDo Training Curriculum, providing our students with the best, and most efficient, all around Martial Arts program available. Our Martial Arts Program is divided into 5 areas: 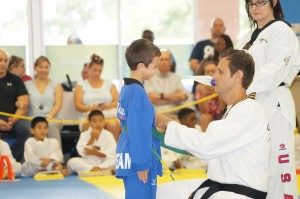 Lucas Rodrigues, Head Instructor and Owner of G3 America Martial Arts, is a 4th Degree Black Belt and originally from Brazil. Instructor Lucas started Martial Arts when he was a young teenager and after 5 years of practicing Capoeira (Brazilian Martial Arts), he was invited to try out TaeKwonDo in 1996. Since then, he hasn’t stopped.

Instructor Lucas Rodrigues trained under Master Fabio Goulart, in Santos, where he rapidly became part of the competition team winning many state and national tournaments and championships, such as the 1997 and 1998 Brazil Open. In 1997, Lucas earned his black belt through Master Fabio Goulart and moved to the USA to train, teach and compete internationally.

Instructor Lucas’ goal is not only to share his knowledge and experience as a former athlete but as a current coach and instructor to make a positive impact on the character development and lives of students and to raise National, International and Olympic Champions.

Lucas Rodrigues earned a degree in Business Administration in 1998 and opened his first Training Center in Brazil, Santos, at the age of 20. In 2010, Instructor Lucas found the true meaning of his life and calling in Jesus Christ and since then his life has been transformed and devoted to seek and fulfill God’s will in his life, through the relationship with our savior Jesus Christ. ” The greatest thing in life is when God uses us to accomplish His will in someone else’s life. It is an honor to serve our God and to love and serve others. And G3 America Martial Arts honors God through our love and dedication to all our students honoring His calling in our lives” says, Instructor Lucas.

Caroline Rodrigues, After School Director and Co-Owner of G3 America Martial Arts, has earned her Criminal Law Degree in Brazil and since she moved to the United States she has invested her life into the wellness field. As a professional massage therapist, Caroline has earned certifications in  Brazil, Thailand, India, and the USA with approximately 12 years of experience. She is on the way to earn her Black Belt and loves working with kids.

As the After School Director, Mrs. Rodrigues implements and supervises all activities, rules and after-school leadership curriculum. Caroline Rodrigues is married to Instructor Lucas Rodrigues since 2006 and they have 2 kids

Our Team and Staff

Our Team of Instructors are WTF Certified Instructors from the USA, Brazil, Chile and South Korea. Together, we bring years of experience and knowledge that give us the ability to continuously develop an extraordinary curriculum and provide exciting, fun, and challenging classes!!

Our Team of Counselors and Assistants are trained and skilled to provide a safe, structured, and fun atmosphere to promote growth and to assist our students in the process of developing great decision making!! 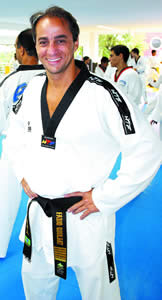 Master Fabio Goulart, owner of Fabio Goulart Academy, throughout the years, has accumulated many titles, such as 1991 Pan American Gold Medalist, National and South America Championships, and among others, represented Brazil in the 1999 World’s Championship as an athlete and captain of the Brazilian National TaeKwonDo Team. Not too long after, he was appointed as the Junior National Coach where he stayed until 2010. 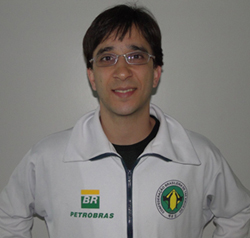 Master Belmiro Giordani, who also trained and graduated as a black belt under Master Fabio Goulart, is currently the Coach for the TaeKwonDo Brazilian National Team. He started TaeKwonDo under Master Fabio Goulart when he was 3 years old and collected, throughout the years, many different titles, including 4 x National Championships, South American Championship, and Pan American Championship, among others.